Urban poor communities are generating their own evidence to uncover the reasons – overlooked by authorities – that Karachi floods.

This is the latest in a series of blogs and interviews, curated by IIED senior fellow David Satterthwaite, examining different aspects of global urban change.

Whenever Karachi floods, the government announces plans to widen its storm water drains (nalas) that carry the floodwaters to the sea. It then announces the number of houses in the katchi abadis (informal settlements) to be demolished along the banks of the nalas, considered to be blocking the flow of water.

In 2020, rains flooded both low and high-income areas, paralysing the city. The judiciary ordered all encroachments along the nalas to be removed and deployed Rangers (a much-feared paramilitary force) in case the settlements put up resistance. Housing in the Manzoor Colony settlements were among the first earmarked to be demolished.

Communities have long argued that their encroachments are just one of the reasons why Karachi floods. Other reasons are that the nalas are choked with sewage sludge and garbage, while independent planners point out that three of the major outfalls to the sea are blocked – so even if the nalas are widened, flooding will still occur. 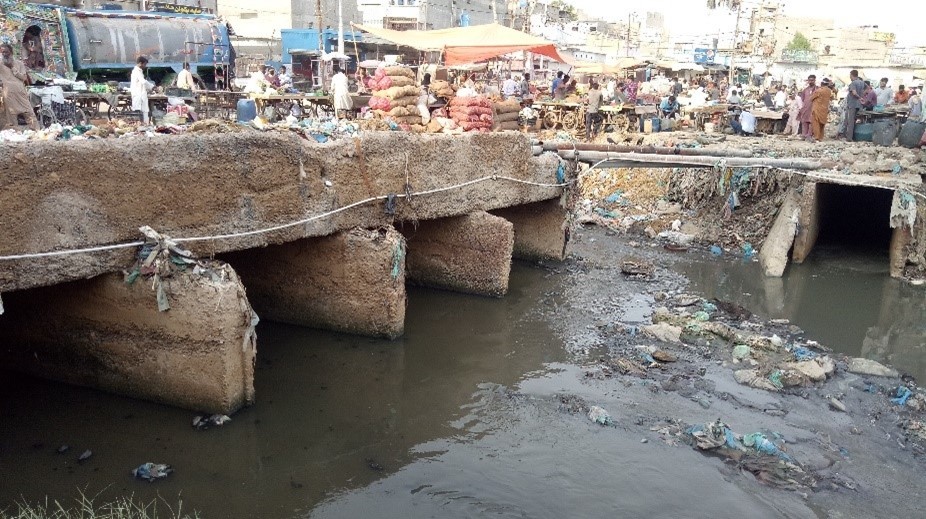 The nalas aim to carry the floodwaters to the sea but become obstructed (Photo: copyright Urban Resource Centre)

At a meeting of civil society organisations in September 2020, ahead of planned demolitions along the Manzoor Colony nala, the community decided to carry out its own mapping to determine the number of houses needed to be removed.

Arch. Fazal Noor of the Urban Resource Centre (URC) board was responsible for overseeing the mapping while Sirajuddin, head of Technical Training Resource Center (TTRC), an NGO trained in community mapping by the Orangi Pilot Project Research and Training Institute (OPP-RTI), was responsible for surveying and mapping the Manzoor Colony natural drainage system with community involvement.

The URC was appointed advisor because of its long working relationship with the communities in Manzoor Colony and nearby settlements, threatened with eviction since 1997.

The URC convened local activists to plan out a mapping process and also involved the area’s Provincial Assembly. Sirajuddin, supported by the local activists, walked along the nalas and their various tributaries.

He sketched out the system and discovered that 18 nalas were connected to the Manzoor Colony nala and carried sewage and floodwater from 34 settlements, including six formally planned, middle- and high-income housing schemes. This information was transferred onto a map. The community identified drain blockages, the reasons for them, and marked and photographed them.

The community numbered each house along the Manzoor Colony nala and made lists of the owners, and families living in each building. The community also identified houses that were less than 20 feet from the nala edge – as 20 feet is required for bringing in heavy machinery to clean and maintain the nalas. Young residents helped the survey team and took great interest in the technical aspects of the survey.

The findings showed that the Manzoor Colony nala is about seven feet deep, of which three to four feet are filled with sewage sludge and silt. At 21 points in this drainage network the Manzoor Colony nala and the other nalas connected to it are blocked with garbage, debris, and collapsed infrastructure. All this was mapped and photographed. 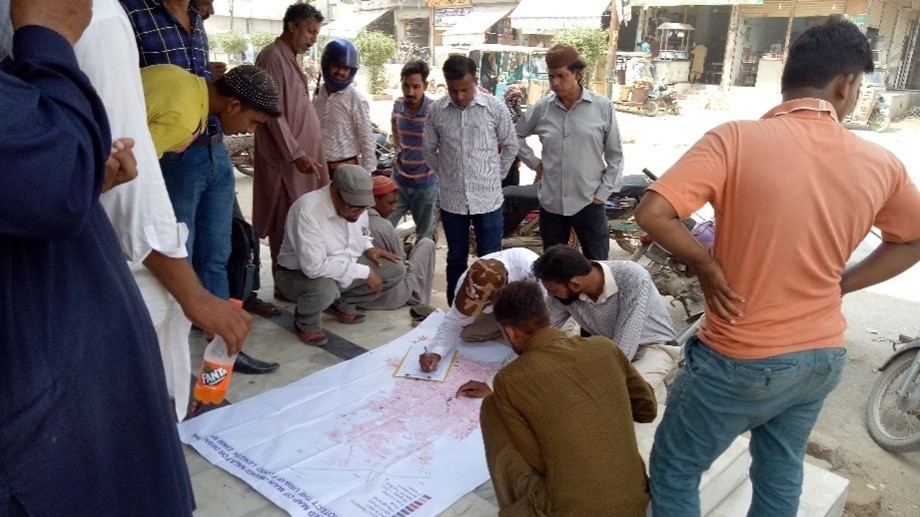 Community members undertook their own mapping to identify the number of houses needed to be demolished (Photo: copyright Urban Resource Centre)

Uncovering how to prevent future flooding

The communities believe that if these obstructions are removed and the nalas are cleaned and maintained, flooding will not take place, as the nalas’ capacity will have increased by well over 100%. By leaving 2 feet free on either side of the nala only 39 houses will need to be removed.

During heavy rains this drain floods the Defence Society and a backwash at high tide makes it difficult for the Manzoor Colony network to drain into the sea. The flooding is due to the Defence Society having encroached on the one-kilometer-wide estuary of the Gizri Creek and reducing the nala’s width to 60 feet.

In November 2020, the  police moved into Manzoor Colony with heavy machinery to demolish 992 houses and 156 commercial enterprises, marked for demolition. This was resisted by the settlement’s women as most men were away at work. Scuffles broke out between residents (mainly women) and police, with stone throwing, baton charges and use of water cannon; the police withdrew.

Meanwhile, the government decided to demolish 10,396 houses along two other nalas along with 2792 commercial units.

The Manzoor Colony nala mapping was presented (including via Zoom) to the media, NGOs, professionals, community activists and to the Karachi Press Club by the TTRC and the Joint Action Committee (a civil society coalition fighting evictions in the Karachi district) along with footage of resistance.

It has also featured on various apps that deal with political, social and planning issues in Pakistan and in the print and electronic media.

Click on the image above to expand it. This is an extract of the community-generated map showing the Manzoor Colony nala system. The full map is available on IIED’s Flickr site.

The mapping of the Manzoor Colony nala has prompted other settlements to carry out a similar exercise. TTRC is helping to document two other nala systems, drawing in a number of young persons who wish to be trained in the mapping process.

It is unclear whether the government agencies have considered the community mapping results. But based on its revised surveys, it is now demolishing only 56 houses in Manzoor Colony.

Another important change relates to women’s role. They have come out of their houses, organised protests, and fought against the police. They have contributed to the building of these houses through household and community savings, selling dowry items such as jewelry, and providing help in construction. Women in other settlements wish to follow their example.

Despite all the protests and the reporting of the community mapping process, the state is still not willing to discuss policy issues with the residents of low-income settlements. But if the mapping process continues and new information and knowledge is generated and spreads, a discussion on policy will eventually follow.