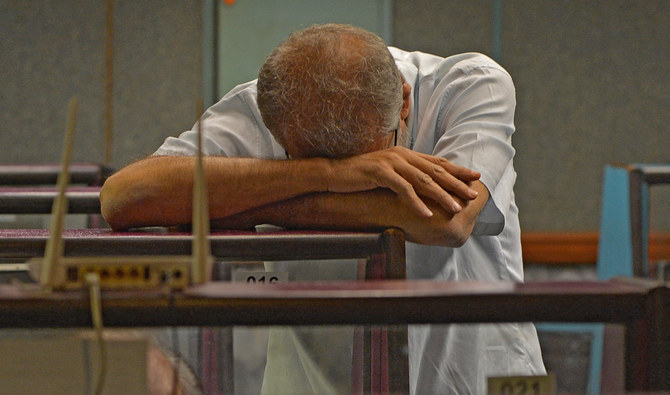 A Pakistani stockbroker reacts while monitoring share prices during a trading session at the Pakistan Stock Exchange (PSX) in Karachi on December 3, 2018. (AFP/File)
Short Url

KARACHI: Experts on Friday blamed multiple factors for growing level of anxiety among the residents of Karachi after a survey conducted by a German company VAAY listed Pakistan’s seaside metropolis among the ten most stressful cities in the world earlier this week.
According to the company’s official website, the Least and Most Stressful Cities Index 2021 was developed after comparing and analyzing 100 global cities for factors leading to tension and anxiety. The cities were chosen for their size and significance, as well as for their availability of reliable and comparable data.
Karachi ranked 93rd on the index, which made it join the bottom ten places, though it was still found to be better than Mumbai (100), New Delhi (97) and Moscow (96).
Iceland’s serene capital, Reykajavik, topped the list of the least stressful cities, followed by Bern in Switzerland.
“Apart from other important factors like environmental and civic issues which require official response, the lifestyle of the city’s own dwellers should also be blamed for growing level of stress in Karachi,” Professor Iqbal Afridi, president of the Pakistan Psychiatric Association and head of the Psychiatry Department at the Jinnah Hospital, told Arab News.
He said that stress-related cases in Karachi had significantly increased over the last several years.
“The seriousness of this can be gauged from the fact that we have been seeing over 400 patients at our OPD [Outpatient Department] every day despite COVID-19,” Afridi added.
“The environment of Karachi has worsened, and air and noise pollution are on the rise,” he continued. “Even at our beaches, one cannot find fresh air as the seashore is also polluted.”
However, he maintained that the security situation had relatively improved in Karachi which was a good thing.
Afia Salam, a Karachi-based climate expert, listed several factors which she thought were responsible for the city’s low ranking.
“The index measures the stress factors of governance, environment as well as other facilities and fares quite poorly. The high density of population, the noise and air pollution, traffic congestion etc pull Karachi way down on the index,” she said while pointing out that increasing temperatures also constituted another factor that added to a general sense of stress among people.
Zahid Farooq, who works with the Urban Resource Center, said the survey reflected Karachi’s ground realities.
“Why shouldn’t Karachi be counted among the most stressful cities when it contributes 68 percent to the national exchequer but only gets about three percent in return,” he asked, adding that the megacity with two ports was consistently deprived of its fair share.
“Karachi is among the ten largest cities of the world and its population is almost double of what is officially claimed,” Farooq maintained. “The people who live in this city that generates so much revenue lack access to pure drinking water, electricity and transportation.”
Murtaza Wahab, spokesperson of the Sindh administration, said his government had prioritized the development of the city’s environment.
“Several programs have been initiated for the megacity under the Karachi Neighborhood Improvement Project which aims at transforming Karachi into a more livable, competent and productive mega city,” he said. “The objective of the program is to enhance public spaces in targeted neighborhoods of Karachi and to improve its capacity to provide selected administrative services.”
“The provincial government has also carried out massive tree planation drives and established several urban forests across the city,” he added.