Water Mafia and Governance in Karachi

Water Mafia and Governance in Karachi 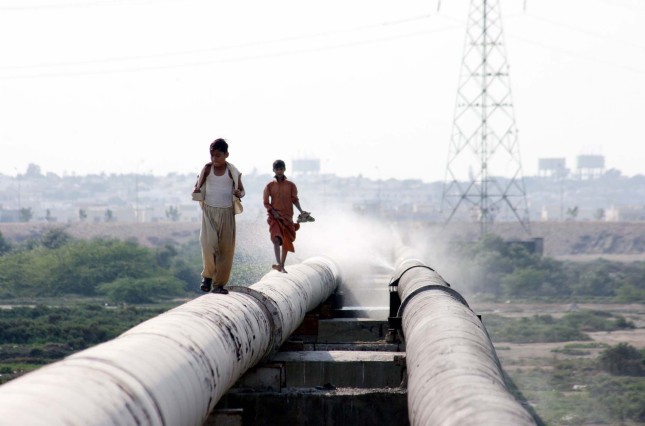 Water provision is “more lucrative than drugs,” said one of the interviewees in our research in Karachi, Pakistan. Competition for control of the city’s water includes water mafias and formal institutions. As water becomes increasingly scarce due to ongoing climate changes in the Indus Basin, it is already a source of intense economic and political competition. If not addressed in time, water scarcity may deepen fault lines in this highly fractured, multi-ethnic, populous city.

Gaining a better understanding of water insecurity in Karachi can provide key insights for governance, local politics, and criminality related to water access challenges for marginalized social and political groups. Climate-related stresses make understanding the relationship of water woes even more urgent for Karachi and other cities where violence shapes everyday life, including access to water.

Karachi is located at the southernmost edge of the country and is the city furthest downriver in the Indus River system. As Indus flows have decreased in the past few decades, they have triggered intense political tensions between the upriver and downriver populations across the country. Karachi’s share of water is also under strain within the city. Home to almost 20 million people, Karachi is Pakistan’s largest city, its financial hub, and (until recently) its only coastal city. Currently, only half of the city’s needs are met—the city has 550 million gallons per day, but the population size requires 1.1 billion gallons per day. This is unsustainable, especially considering how approximately 0.6 million people migrate to Karachi annually.

Scholarship suggests that resource scarcity can either be produced (for instance, caused by inefficient water management) or caused naturally. Karachi experiences both types.

According to the natural scarcity argument, water can become scarce due to increased demand, natural degradation (e.g., climate-related stresses), or a combination. Because of climate changes in the Indus Basin, stream-flows are dwindling. Increased demand comes in part from the massive in-migration from other parts of Pakistan to Karachi. An often-suggested solution in the literature is more efficient resource management and technical advancement.

From the produced scarcity argument, a resource may become scarce if it is not shared fairly or equitably. In cities, scarcity can also be produced through political and economic decisions. This type of scarcity occurs in Karachi where, in addition to climate related stresses, produced scarcity is compounded by different actors competing for power over this vital human need. A potential solution for produced scarcity is for people to govern the commons—work together to manage their shared resources—more effectively. 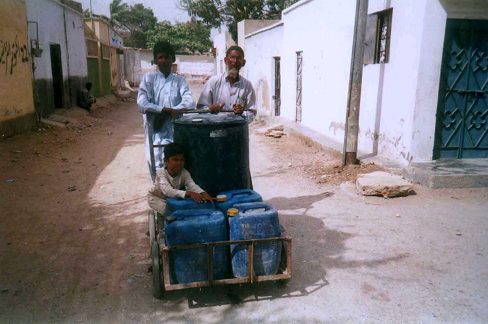 Water scarcity in Karachi is often linked with water mafias and poor governance. However, our previous and ongoing research indicates that its scarcity is a product of decisions made over time by provincial and municipal governments, political players, and urban planning.

Efforts to gain administrative control of the Karachi Water and Sewerage Board (KWSB), which is formally responsible for water and sanitation, illustrate how governance decisions are linked to scarcity. Representing particular ethnic groups, major political parties have sought control of the institution through large-scale appointments of loyalists during their stints in power. These actions have deepened inter-ethnic grievances. Fierce contestation over policies, undertaking high profile development projects under public-private partnership models, and only awarding contracts to allies are some of the strategies the groups have used.

Informal housing and planned communities are another arena of competition over water resources. Investments in prime real estate by the economic and political elite have contributed to inequality in water access. While residents of low-income or informal settlements barely get access to clean and affordable water, residents of planned residential communities are ensured uninterrupted piped access. 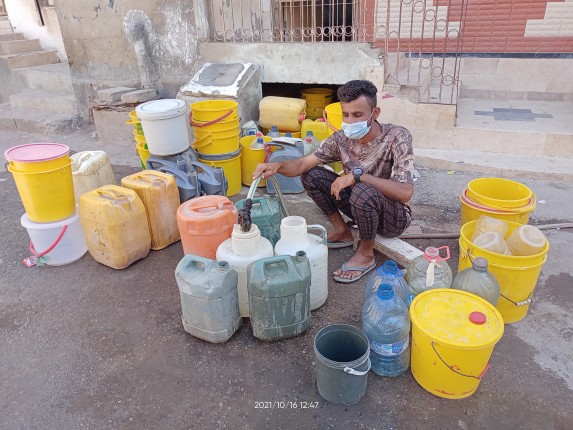 Water mafia and other water providers

It is in these contexts that the “water mafia” sells water in Karachi. The term was used by people we interviewed who belong to diverse socioeconomic backgrounds. While the term denotes criminality, the water mafia’s narrative is actually about the interests of multiple actors—including officials, entrepreneurs, community members, and political parties—trying to increase water access to their community for economic and political gains.

Fierce contestation among political players over city resources has led to a considerably weakened KWSB. The KWSB has limited control of its own water pipelines. An employee we interviewed said, “we don’t know where the water goes anymore. The valves that were installed on main pipelines to regulate water distribution in different neighborhoods have been broken off by local strongmen. They have set up their own valves and control its distribution in most areas.”

In Lyari, one of the most impoverished areas of Karachi, local gang members routinely tamper with pipelines. One resident said about his neighborhood’s predicament, “when the gang war was raging a few years ago, the local gang leader didn’t want us to take the water anymore, so he cut the main. Now the gang war is over, but we are still stranded.”

In Korangi, another low-income settlement, operatives of a local political party collect water dues and control everything from pipeline construction to what time residents are allowed to collect water. One interviewee said, “the times pipelines have water in particular neighborhoods is known to local strongmen with surgical precision. WhatsApp groups relay us this information. Be it in the middle of the night, or early hours of the morning, we have to be ready with our suction pumps and pipes to connect to the main at the allotted time to get water.” Those who do not have large water tanks built in their houses rely on jerry cans and small drums for water storage.

The other major source of water for Karachi residents is through water tankers delivery. Although accurate numbers are not known, it is estimated that millions of Karachi’s residents rely on water tankers—from affluent, gated communities to densely populated city center neighborhoods and informal settlements. Depending on what a buyer can afford to pay, quality ranges from potable water to untreated, unsafe water. Underprivileged populations living in low-income and informal settlements suffer the most. Barely making ends meet, they pay exorbitant prices to access poor quality water through tankers, bored wells, and punctured main pipelines.

Many water tankers are linked with criminality, both because they draw on illegal hydrants and because they bring in substantial and off-the-record proceeds shared among influential actors in the city. Meanwhile, the KWSB suffers from considerable revenue losses annually.

Criminality in water supply is made lucrative in part because of the complicity of formal players. For instance, low-level water government officials share information with entrepreneurs in exchange for money. Officials are well aware of how area gangs divert water from pipelines to their own political party’s favored neighborhoods, thus connecting criminality to the city’s politics. 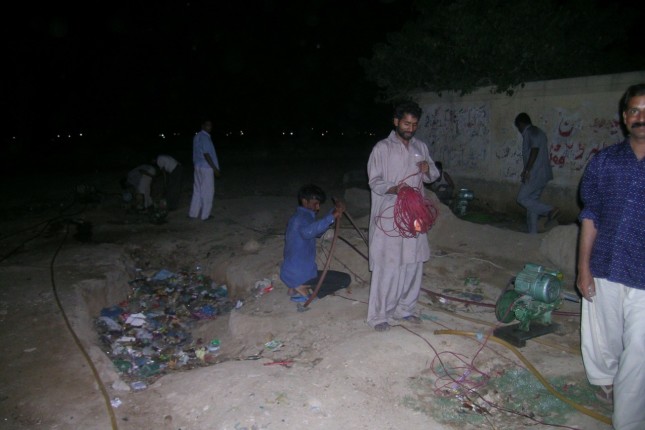 People tapping into mains on their own in Korangi, Karachi (source: Urban Resource Center, Karachi)

Water scarcity and political instability: what may lie ahead

Pakistan is one of the worst affected countries from climate change and experiences enormous water stresses. Acquiring additional water for Karachi appears nearly impossible. Scarcity is bound to intensify tensions within institutions and on the streets, given how criminal and political violence has been an effective mechanism for water access, and how ethnic, sectarian, and class divisions crisscross the urban and social fabric of the city. The entrenched nexus of informal providers and political entrepreneurs vying for money, votes, and prized access to water will also gain more influence.

Developing greater understanding of water insecurity in Karachi is urgent for conversations on climate-related urban water stresses. Without comprehensive explanations, governments may implement policies which contribute to water stress among the most marginalized populations, as well as increase the power of gangs and other criminal actors. Doing so could exacerbate social, political, and economic fault lines in societies. For marginalized populations already experiencing produced scarcity, living conditions could become even more desperate. More holistic research on these dynamics is essential for Karachi and other growing cities.