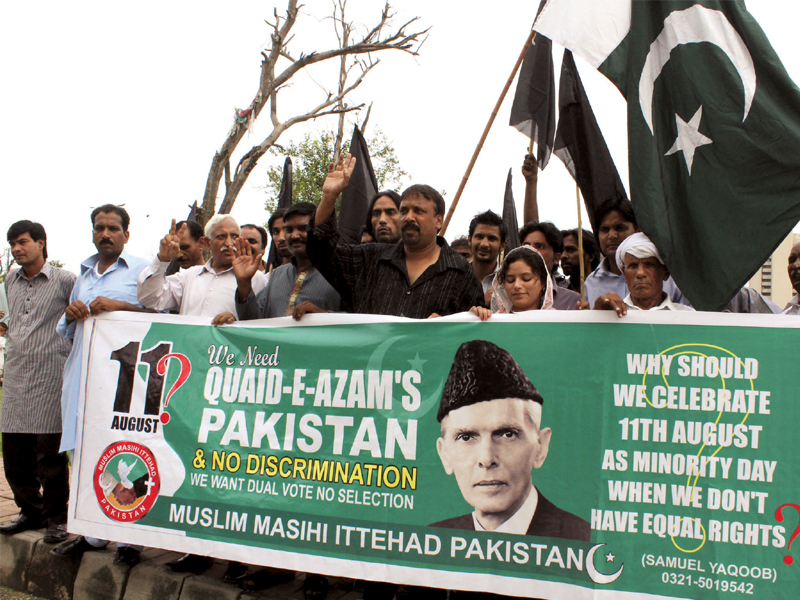 KARACHI:The civil society and human rights activists called upon the government on Thursday to safeguard all citizens’ rights irrespective of their religion and protect their life and property.

The founder of Pakistan, Quaid-i-Azam Muhammad Ali Jinnah, envisioned Pakistan to become a peaceful country where all citizens had the right to enjoy equality and were free to practice their faiths.

The speakers said that the federal government has notified the curriculum for religious education solely for non-Muslim students for Grade I-V and VI-VIII, which comprises content from seven religions, including Christianity, Hinduism, Sikhism, Baha’i, Kalash, Buddhism and Zoroastrianism.

Therefore, the provincial government must adopt a curriculum for religious education, develop textbooks and engage teachers to teach minority students the subject in schools, they suggested.

They urged the government to take action against those who take the law into their hands and target minorities. They added that the state is responsible for protecting the life, honour and property of the people from the minority communities.

Sindh Minister for Minority Affairs Giyan Chand Essrani on Thursday said August 11 was observed as the National Day of Minorities to pay tribute to the minority community for their services in establishing Pakistan and nation building.

In his message on the National Day of Minorities, Giyan Chand said the minority community is an integral part of the country.

“We consider the land our mother, and Pakistan is our mother. We are proud of our country”, he said. The minister said Hindu, Sikh, Christian and Parsi communities have an essential role in the country’s development. He said Pakistan is a safe country for minorities. If doubts prevail, one should observe the plight of the minorities in the world’s largest democracy India.

Karachi Administrator Murtaza Wahab said that August 11 provides an opportunity to renew commitment to protect the rights of minorities.

“The founder of Pakistan, Quaid-i-Azam Muhammad Ali Jinnah, had guaranteed the protection of the rights of minorities in the country, under which minorities in Pakistan have all kinds of legal rights,” the administrator said.